I just updated Planet Minesweeper for the iPhone 5's new resolution. It seems like iOS's free lunch of "fixed screen size" is coming to an end. There's now five official resolutions, although really it only feels like three with the excellent handling of "points" and displayScale that iOS provides. Five is not too bad. I'm sure Android developers -- with literally hundreds of sizes to support -- are tuning up their world's tiniest violins at this, but it's begun and it's only going to get worse with rumors of widescreen iPad minis.

But still, it got me thinking about how far we've come. Most people, even programmers if you're not actively working on iPad3 retina, you might not realize just how freaking big that is. Even on the iPad3 itself it's hard to grasp since the density is so high.

I threw together a screenshot of various resolutions to give a direct, side-by-side comparison. 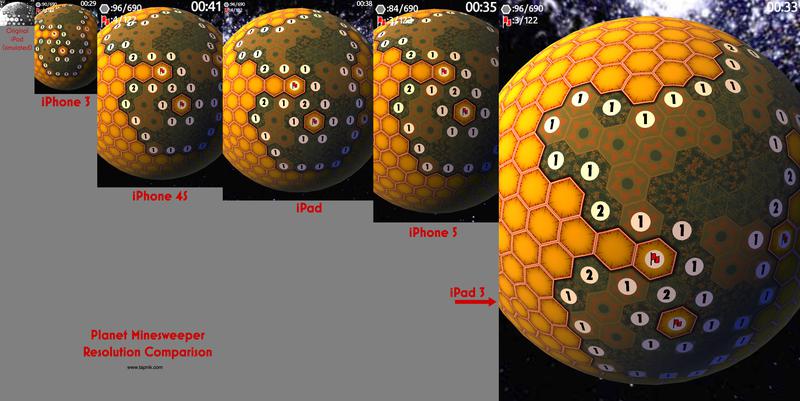 Make sure you open this in another tab or something and view at 100% so you can see it at the real scale.

Ok, so the leftmost iPod image is just for fun. But that is the resolution of the original iPod. That's about the size of a single icon on the retina iPhones. The Star Wars prequels were rendered at a lower resolution than this for display on a 50 foot wide screen, and now we're playing games that push this many pixels every frame.