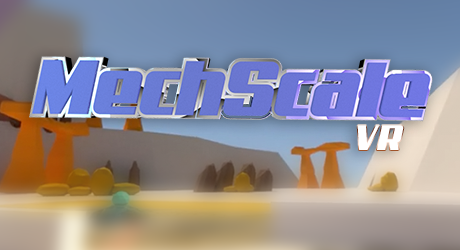 Giant Mechs in VR. A new way to move, shoot and stomp your enemies.

Update: This made a pretty cool tech demo, and I demoed it at a Unity/VR meetup last year but this is pretty much shelved right now.

Mechscale is a game about Giant Mechs in VR, featuring an innovative movement mechanic. Instead of teleporting, "scale up" and enter a giant mech that can stride across the entire playspace, not to mention decimate enemies with overpowered mech weaponry or just stomp them like bugs. Scale back to human form for precision tasks and powerups.

This game is in development. Check out the development videos for progress and updates.

How can I find out more?

If you would like to be notified when the game is released or when there is a beta, join the mailing list at the bottom of this pages.

Will there be multiplayer?

Initially, no. But I really want to add it. It would be awesome to have a roomscale all-out battle with giant mechs. That was the initial idea for this, but I've worked on multiplayer games before and they are hard, even with the extra challenge of VR. So initially this will be a single-player experience, but if I get enough interest and downloads to support further development I'd love to add multiplayer in an update.

When will it be done?

I don't like to try and predict release dates, buy my current plan is to release a smaller, minimum version of the game as soon as I can. The faster I get something playable the more feedback and iteration I get so yeah.